Based on widely accepted scientific measurements, global emissions reduction efforts, while essential, have not succeeded in reducing levels of atmospheric greenhouse gases.

The annual rate of carbon released into the atmosphere is accelerating (for many reasons which need not be discussed here). Reducing emissions and building out alternative energy are necessary but insufficient to address global warming and, based strictly and objectively on atmospheric carbon numbers, have yet to show significant signs of success.

While we have gone through many phases of optimism – and a dramatic change is always possible – there is little evidence that such necessary atmospheric carbon reductions will take place in a suitable time frame. Indeed, the unprecedented rate of growth of atmospheric carbon to over 3 ppm during 2016 despite major advances in development and deployment of alternative energy is testament to an incomplete and not-yet-effective strategy. (See http://www.esrl.noaa.gov/gmd/ccgg/trends/gr.html.)

The only practical, inexpensive and readily available “technology” for the massive carbon drawdown necessary is photosynthesis and associated biodiverse processes.  Such essential eco-restoration brings many advantages, including low cost, high food productivity, mitigating and often ending floods and drought, local economic self-sufficiency, and eliminating conflicts over scarcity. Land managers across the world have decades of eco-restoration experience on millions of acres. Evolving management approaches are highly effective and well-known outside of the conventional management practices that created the problem in the first place.

It is therefore time to reassess our climate strategies and proceed accordingly.

When Michael Mann et al. introduced the hockey stick climate graph in 1999, they were representing global warming as an exponential process. We didn’t know at the time how rapidly exponential it was going to be, and the pace of acceleration caught just about everyone up short. Notwithstanding, apparently as a result of questionable assumptions about multi-decadal time frames for action, we still often discuss various distant (i.e., not this year or next) climate targets as if nature were going to accommodate our ineffectual responses.

We chronically speak of goals by 2030, 2050, 2100. Yet, while we’ve identified accelerating positive feedback loops such as melting ice and wildfires, we persist in talking and thinking about climate change as if it were a linear process.  To the exclusion of other possibilities, collectively we have single-mindedly focused on emissions or, to a lesser extent, on untested, expensive and frequently dangerous high-tech experiments.

Certainly there are scientists and activists who understand the alarming urgency for effective climate action. Unfortunately  the alarm is apparently not yet great enough to change the climate conversation to include the only feasible option left to humanity at this point in time, the power of the biological world to exert a positive influence on the course of events.  It is now almost midnight for switching course to give eco-restoration an equal or even greater share of our climate remediation efforts, which will surely fail unless we bring life back to billions of desertified and degraded acres across the earth. 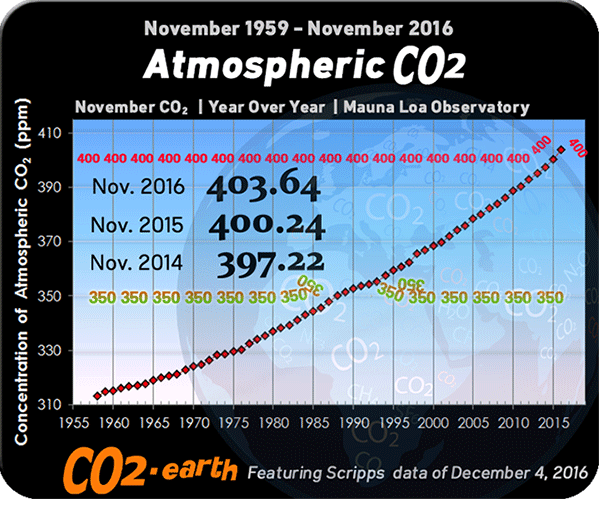 The annual growth rate of atmospheric carbon dioxide measured at NOAA’s Mauna Loa Observatory in Hawaii jumped by 3.05 parts per million during 2015, the largest year-to-year increase in 56 years of research. In another first, 2015 was the fourth consecutive year that CO2 grew more than 2 ppm, said Pieter Tans, lead scientist of NOAA’s Global Greenhouse Gas Reference Network. . . . The last time the Earth experienced such a sustained CO2 increase was between 17,000 and 11,000 years ago, when CO2 levels increased by 80 ppm. Today’s rate of increase is 200 times faster, said Tans. [emphasis added]  The big jump in CO2 is partially due to the current El Niño weather pattern, as forests, plant life and other terrestrial systems responded to changes in weather, precipitation and drought. The largest previous increase occurred in 1998, also a strong El Niño year. Continued high emissions from fossil fuel consumption are driving the underlying growth rate over the past several years.

The growth rate of climate forcing due to human-caused greenhouse gases (GHGs) increased over 20% in the past decade mainly due to resurging growth of atmospheric CH4 [methane], thus making it increasingly difficult to achieve targets such as limiting global warming to 1.5°C or reducing atmospheric CO2 below 350 ppm. Such targets now require “negative emissions”, i.e., extraction of CO2 from the atmosphere [emphasis added].

A large fraction of anthropogenic climate change resulting from CO2 emissions is irreversible on a multi-century to millennial time scale, except in the case of a large net removal of CO2 from the atmosphere over a sustained period [emphasis added].

LIMITS TO EFFECTIVENESS OF EMISSIONS REDUCTIONS

It is clear that at this point in history emissions reductions, were we to go to 100% tomorrow, would be insufficient to avoid serious impacts of global warming.  It is also clear that emissions reductions have had limited effects to date. It is particularly important to consider that positive feedback loops have been inadequately factored into the climate equation, and we are now seeing the accelerations characteristic of positive feedbacks in the form of rapid increases in temperature and greenhouse gas concentrations. More tangible as feedbacks are the growing number, distribution and intensity of fires, floods, droughts and other climate-related events.

It is reasonable, even urgent, to conclude that while we should pursue emissions reductions with all due haste and effort, 100% success immediately would still lead to climate catastrophe. We need to look elsewhere for solutions.

The choices of approaches for eco-restoration, mitigation and reversal of global warming are many, and adaptable to a broad spectrum of habitats, biomes and latitudes. Options include but are not limited to reforestation, coastline revegetation, planned grazing grassland management, wetland restoration, applications of biochar and rock powders, permaculture and other intensive agricultural practices, regenerative water cycle management, elimination of all synthetic and fossil-based soil inputs, and focused attention on healthy and biodiverse ecosystems.

The science of eco-restoration as an approach to global warming is supported by considerable study and data. Unfortunately, most of that information is scattered across many disciplines, as much of it was not originally pursued specifically with climate in mind.  New reports are coming out regularly, and many are indeed considering climate, but a coherent and comprehensive eco-restoration climate narrative is still in the early phases of development.  It is a project to which Biodiversity for a Livable Climate is currently devoting considerable effort.

Nobel laureate Albert Szent-Georgy once said, “Discovery consists of seeing what everybody has seen, and thinking what nobody has thought.”  Such is frequently the case with respect to eco-restoration and climate. The information is available but needs to be infused with meaning from a new paradigm in order to be readily understandable and broadly and effectively applicable, both at a land management level and in political and economic arenas.

Briefly, there are several areas where individuals and organizations concerned with climate can play a significant role: